Aerial robotics is a fast-growing branch in robotics and Unmanned Aerial Vehicles (UAVs) are rapidly increasing in popularity. Quadrotors (namely platforms with four actuators) constitute the most common autonomous UAV currently used in urban, rural, manufacturing, military and academic context. Their high versatility allows to their application field to range from exploration and mapping to grasping, from monitoring and surveillance to transportation.  Besides their high popularity, standard quadrotors suffer of several limitations, such as, for instance, the limited payload capacity. The main drawback is however constituted by their under-actuated nature: they have to cope with six degrees of freedom (three  translational degrees of freedom and three rotational degrees of freedom), owning only four control inputs. This translates into the limitation of the executable manuvers set, and even into criticism to interact with the environment by exerting forces only in an arbitrarily-chosen direction of the space.

To overcome this issue, the interest of robotics communities is now moving toward modeling, design and control of more complex multi-rotor platforms, where the number of propellers is larger than four.  Several hexarotor and octorotor vehicles (namely platforms with six and eight actuators, respectively) have been recently presented for applications spanning from multi-agent cooperative manipulation  to human and environment interaction. Intuitively, the intrinsic redundancy of these platforms can be exploited to enhance the actuation properties allowing to  independently control the position. In addition, the presence of a greater number of actuators may improve also the robustness property of the platforms with respect to the loss of one or more propellers, which constitutes a key requirement for the real-world deployment.

An alternative research direction involves the development of effective, distributed and scalable control laws for  large  cooperative groups of aerial platforms (quadrotors and multi-rotor vehicles in general) : the purpose is to combine the (limited) actuation, sensing and communication capabilities of the agents composing the swarm  in order to achieve goals that are beyond the capacity and knowledge of each individual agent.  The interest toward this topic is motivated by the broad potential applications of UAVs swarms in civilian and military areas, such as wide areas surveillance and contour mapping, anomalies detection, target search and localization, and so on. Many formation control strategies have been proposed in past decades, such as leader-follower, behavior, virtual structure based approaches; nevertheless a new research direction is recently emerged resting upon the exploitation of the rigidity theory. 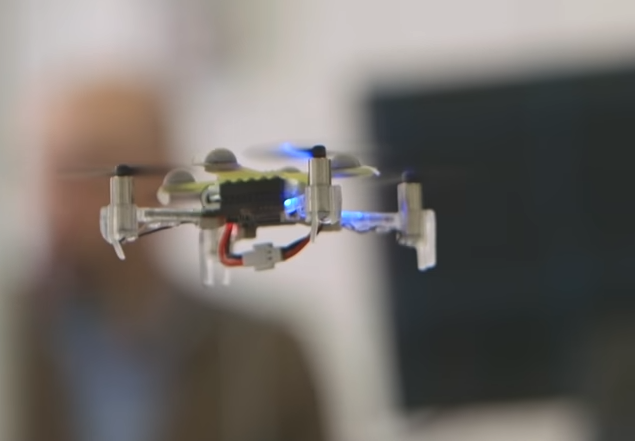 Within the described context, the interest of the SPARCS group is focus on various challenges: